Mir Afzal Tajik is an Associate Professor at the Nazarbayev University Graduate School of Education (NUGSE) in Astana, Kazakhstan. He obtained his PhD from the Ontario Institute for Studies in Education, University of Toronto, Canada and Master of Education from the Aga Khan University Institute for Educational development (AKU-IED), Pakistan. Before joining NUGSE in September 2016, Dr. Tajik worked as an Associate Professor and held leadership positions including Interim Dean, Associate Dean, Head of Graduate Programs, and Director Outreach Programs at AKU-IED. He has also led AKU-IED’s capacity building programs in Afghanistan and Tajikistan. At NUGSE, Dr. Tajik has served as Director of PhD in Education Program and is currently leading several research projects funded by both national and international organizations. He brings over 30 years of experience in education with research interests in teacher education, educational leadership and management, school improvement and community-based education. He is the recipient of AKU’s Award for Sustained Excellence in Scholarship of Application, 2009. 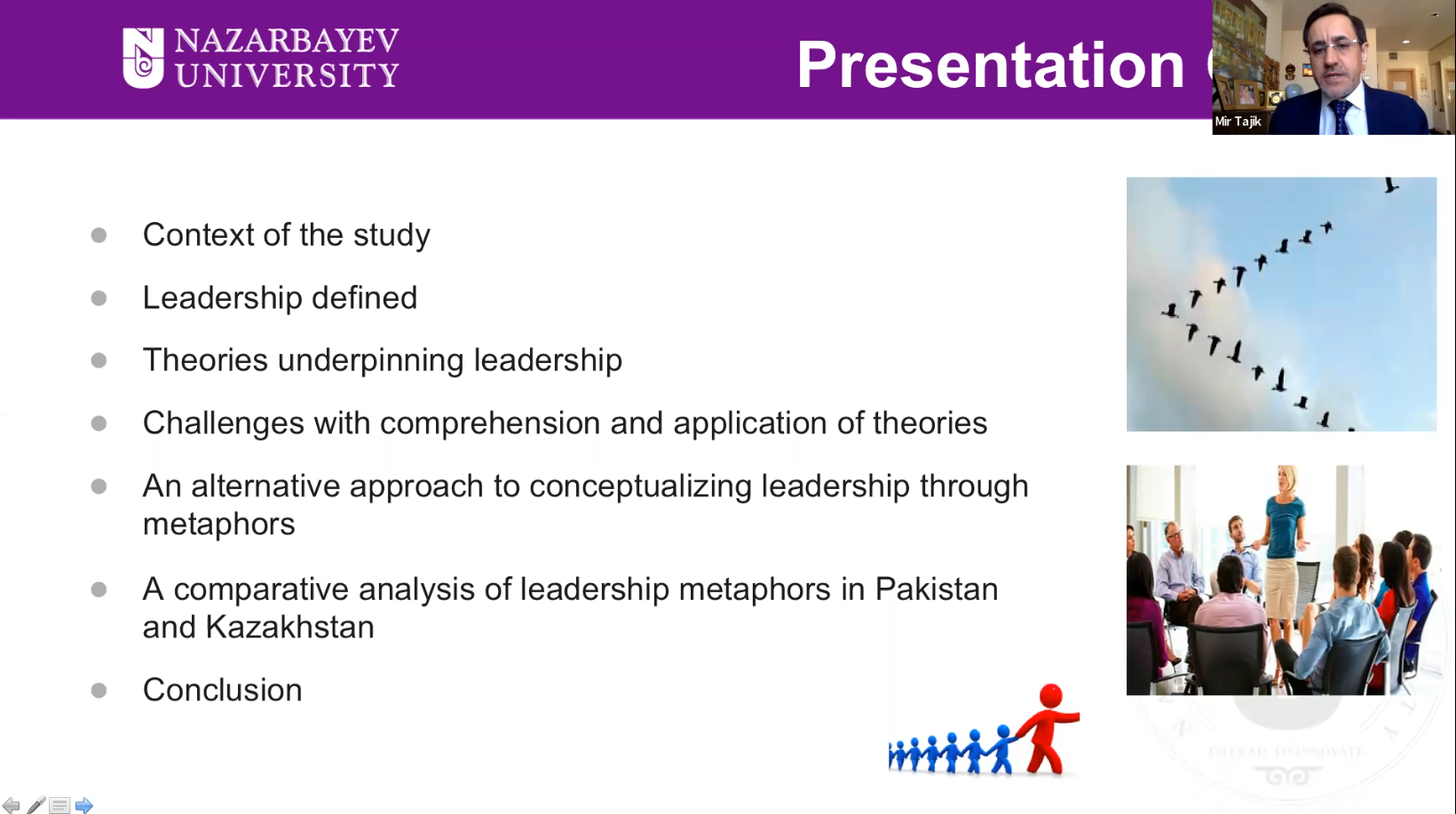 Dr Tajik explained that leadership in general, and educational leadership has been a contested concept lacking clear boundaries and definition within the wider literature. For over a century, a large number of different theories and approaches have been developed, mainly in the developed world, to understand educational leadership. However, practitioners, educators, and students in developing countries often struggle to understand and relate to the abstract, sometimes paradoxical and contradicting, theories of educational leadership. Therefore, an alternative approach in leadership studies is to unpack the different theoretical orientations and concepts of educational leadership through metaphors. Based on an empirical study with leadership students in Pakistan and Kazakhstan, Dr Tajik discussed how the educators, practitioners, researchers, and students can better understand, explain and relate abstract leadership concepts to something more concrete and familiar, by using a wide range of metaphors, rooted in our personal, experiential and cultural contexts. The central argument in his talk was that approaching leadership models through a metaphor exercise enables us not only to visualize and situate leadership in our socio-cultural context, but also to expand our creativity in imagining, creating, rationalizing, and justifying their leadership models. 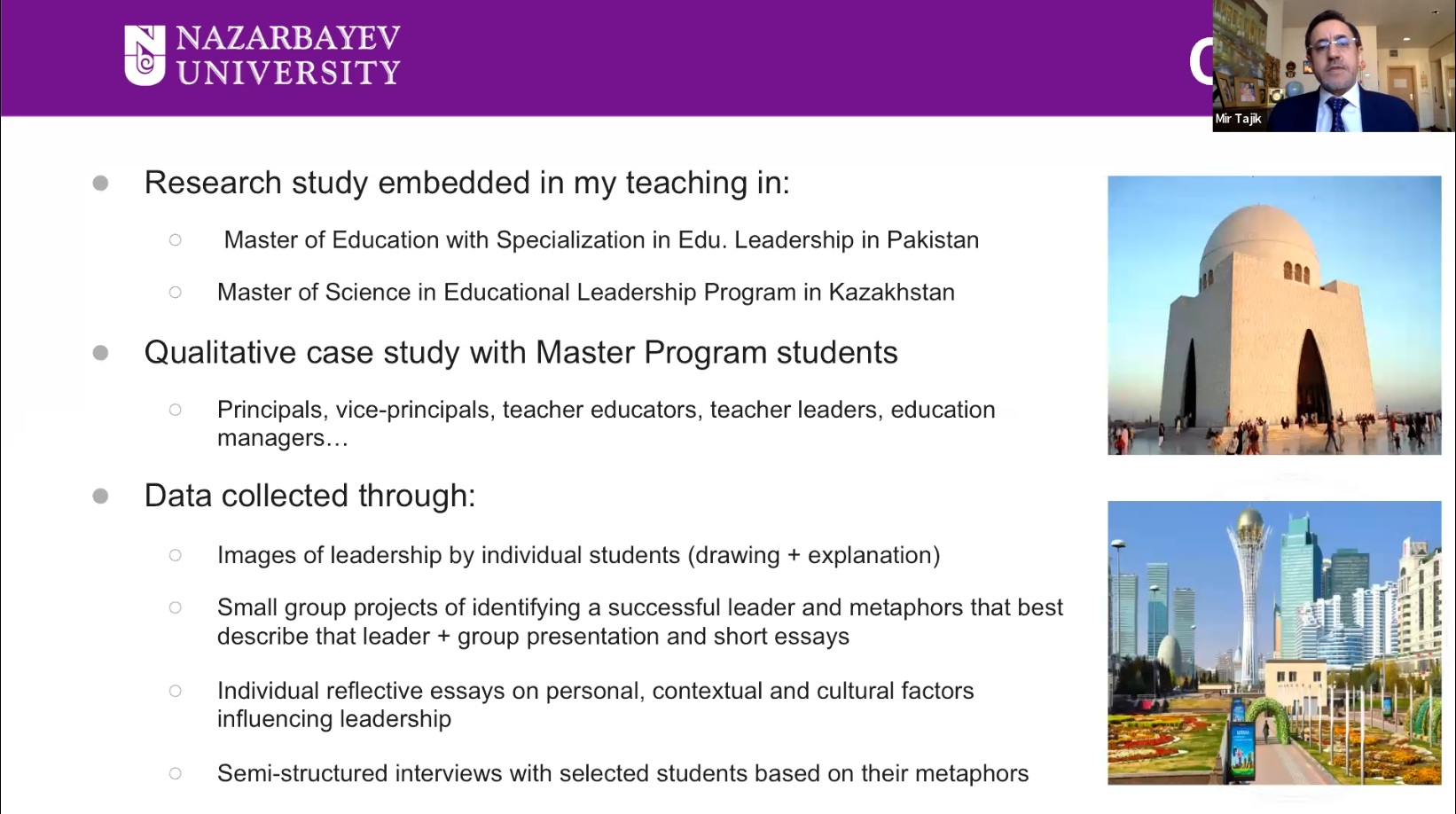 After explaining his methodology of gathering research data, Dr Tajik highlighted the concepts of leadership which exist in humans and also in animal kingdom. He explained that birds move in synchronized way in flocks, animals move in herds for locating food sources. Animals nest and avoid collisions with other animals and protect themselves from threats. According to him, a form of leadership emerges from these activities, as experienced members transfer information to less experienced members by sensory modalities such as vision, temperature, pressure, sound and smell etc. in the meantime, human beings have genetic pre-dispositions to dominate, so a social hierarchy has been established throughout human history marking them with ‘heroic’ fixation of problems.

He mentioned that “Literature provides over 350 definitions of educational leadership, but no clear and unequivocal understanding of what distinguishes leaders from non-leaders”. In the context of his study, he discovered that “Leadership is not a set of skills or positional authority that lies in one individual, but it is a practice which is widely distributed and engaged by a range of people in an organization”. He said that “Because there are diverse definitions of leadership, the concept of leadership has been quite contested in different times, including the present time”. He said that “Leadership is about Vision, Influence and the Process of decision-making, team-building, mobilization and not only about the position itself”. 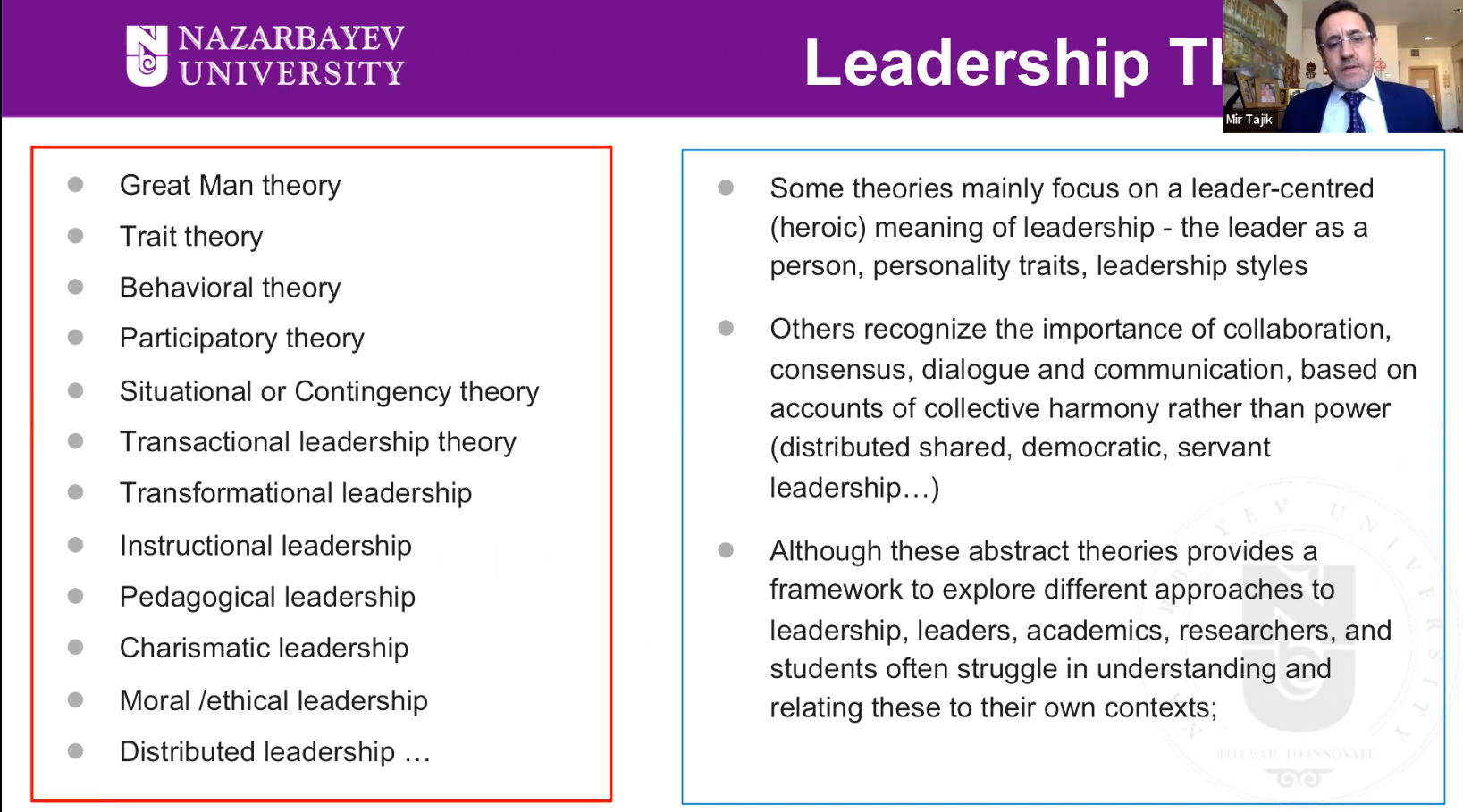 In his presentation, Dr Tajik also shared the many theories of leadership which are prevalent in the society, where he explains how there’s a paradigm shift from the Great-man Theory to Distributed Leadership. He mentioned that “In most cases, these theories engage in romanticized discourse while reproducing the same assumptions and ignoring the complexities of social context in which leadership is exercised”. Continuing, he said that “There is a growing realization that leadership is socially constructed, deconstructed and reconstructed by all organizational actors as they interact overtime”. 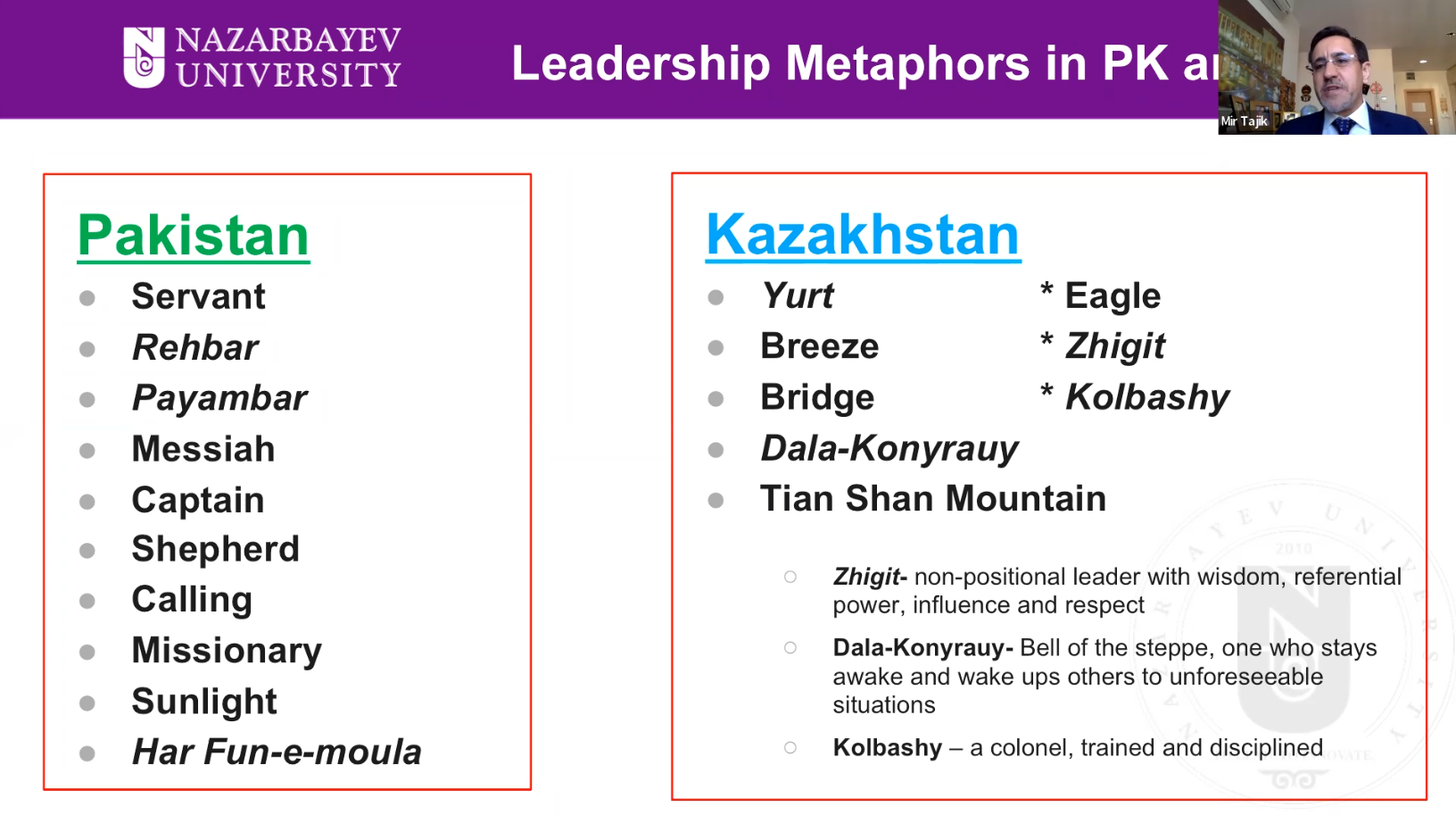 According to Dr Tajik, “One of the best ways to reconceptualize and understand leadership is through metaphors used by leaders, academics and students, rooted in their personal, experiential and cultural contexts”. He says that “Metaphors are important components of figurative language and can be understood from a cognitive approach and also discursive theory”. Further he explained that:

He also said that “Metaphors can play the role of a bridge between the known and unknown, familiar and unfamiliar, and concrete and abstract notions of leadership”. Later he explained the various references which people used to describe a leader in light of their socio-geographic locations. He mentioned that historically Kazakh are nomadic people and therefore their nomadic life is reflected in many of their cultural symbols. Hence, the Kazakh students drew their leadership metaphors mainly from the nature (e.g., breeze, sunlight, mountains, eagles etc.). They also claim to have learnt important lessons about life, society, and leadership from their experiences as pastoral nomads. Later he explained the various metaphors which were used in terms of Leadership Concepts, Theoretical Orientation and the Imminent Leadership Roles, which were assigned to various characters. Please see the description below: 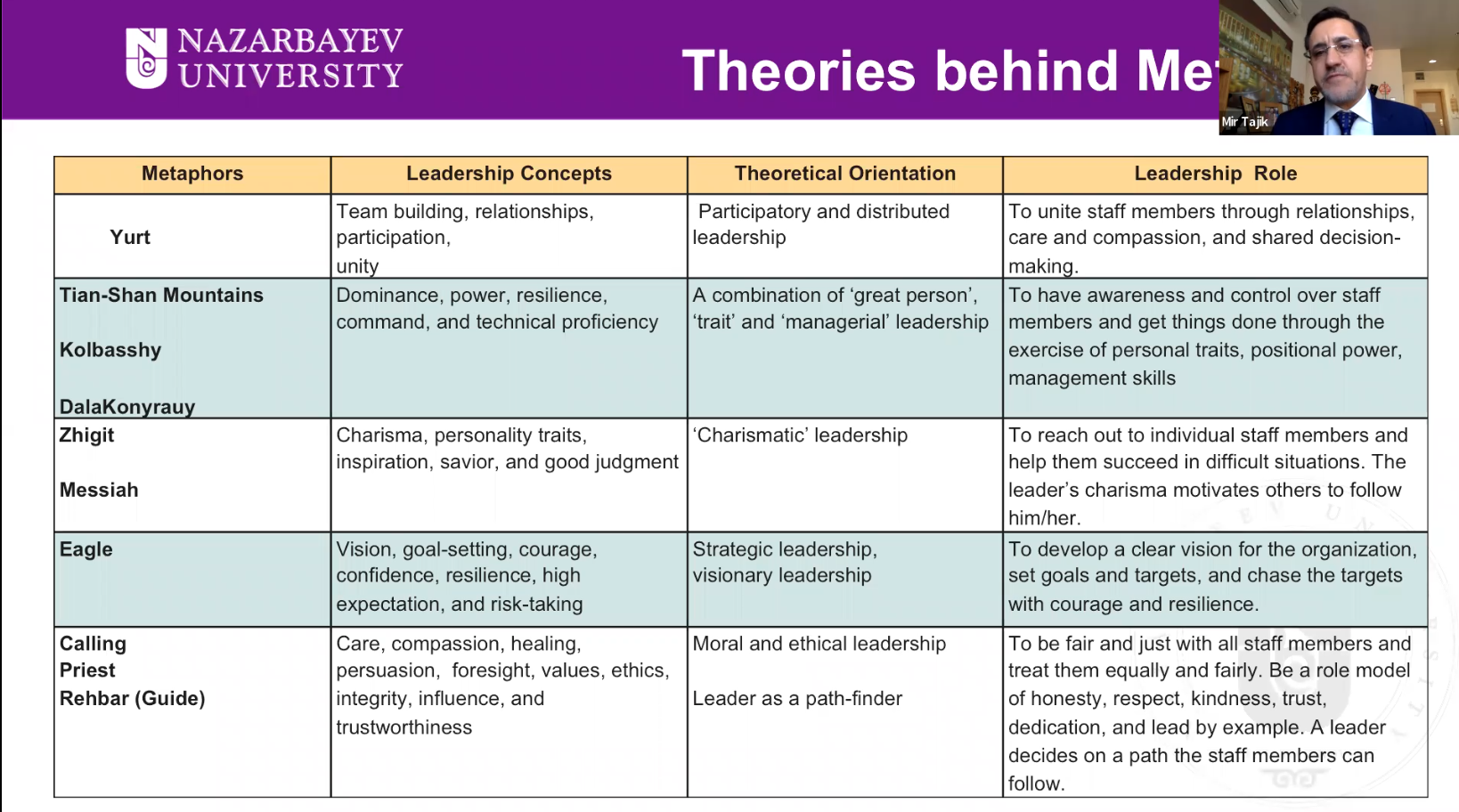 Finally, he explains that “This study showed that approaching leadership through metaphors opens up a window into defining, describing, explaining and painting a more concrete and familiar picture of leadership”. “Metaphors help move from abstract cognitive discussion on espoused theories of leadership to visualizing leadership models which are in use”, he explained. He said that “While one must not romanticize metaphors and be aware of the possible risks of creating a distorted picture of leadership; the strength in metaphor exercise is that it allows students and faculty not only to situate leadership within the personal experiences, cultural values and contextual realities where leadership is enacted, but also expand their creativity in imagining, creating and rationalizing leadership models”.

Gulab Khan, PhD, is an assistant professor in Syed Ahsan Ali and Syed Maratib Ali School of Education, Lahore University of Management Sciences. With over 20 years’ experience in the field of education (K through higher education) in both private and public sectors, his professional journey in education dates back to 1999 when he joined the Aga Khan Education Service, Pakistan (AKES, P), a subsidiary of the Aga Khan Development Network (AKDN) as a substitute lecturer of Chemistry. At AKES, P, in his 16 years of association with the organization, he assumed different portfolios ranging from lecturer, principal, head of monitoring, evaluation and research, and manager academics. In 2015 he switched to higher education as an assistant professor at the University of Swat, a public sector university in Khyber Pakhtunkhwa, where he also assumed additional portfolio as the Director Advanced Studies. In 2017, he moved to National University of Sciences and Technology (NUST) in Islamabad. Afterwards, in 2018, Gulab joined Syed Ahsan Ali and Syed Maratib Ali School of Education (SOE) at LUMS. His research interests intersect at the nexus of education policy and practice on issues related to teacher quality, supervision, teacher status, educational leadership, and school improvement.

EduTalk is an exclusive series of guest speaker sessions by the School of Education (SOE) at LUMS, where various topics in educational research field are discussed by seasoned professional from across the globe.