Social Distance, Teachers' Beliefs and Teaching Practice in a Context of Social Disadvantage

Dr. Rabea published two papers about teaching practices in government school classrooms in Punjab, Pakistan, and this online session draws inference from both these studies. Teachers’ practices are central to improving learning and socio-emotional well-being for all students. Despite the centrality of teachers’ practices to the discourse on quality education, there is a significant gap in empirical knowledge in this area. Using data from classroom observations done as part of the Teaching Effectively All Children (TEACh) project, Dr. Malik and her co-authors describe prevalent instructional practices in government schools in three districts in Punjab, with specific attention to marginalized children. Building on empirical insights from this, in a second paper, they develop a conceptual frame linking teachers’ beliefs, practices and learning outcomes, revisiting the data to dig deeper into teaching and learning processes within the classroom.

In her research, Dr Rabea found out that the classrooms in Pakistan have become increasingly diverse, with children from low-income backgrounds, religious and ethnic minorities and those with disabilities are more likely to be attending mainstream government classrooms. However, in this classroom setups, the children from marginalized backgrounds are more likely to be at the bottom of the learning curve, which is what she calls the left tail. Hence, it is imperative that improvements are made in learning for the most marginalized and those struggling the most for the purpose of equity, inclusion and for achieving learning goals for the classroom groups. Moreover, having teachers who have a grasp of the curriculum, and the teaching method is also a crucial point in the formation of successful classroom learning environments. Dr Rabea said that the quality of teaching is the most significant factor for achieving learning gains.

Explaining the problem at hand in length, Dr Rabea said, “One of the concerns is that we need to know more about teaching practices, but we also need to understand more intangible factors that are very important for how teachers teach and whether or not you can shift their teaching practices in a way that you can improve learning for everybody, since a lot of these are based on their personal beliefs and attitudes.” She said that teacher’s belief and attitude while holding classes during the pandemic, especially in the context of growing social distance between students and teachers, really matter in formulating a positive learning environment. Because these are intangible factors which are not very easy to calculate, more time and energy is spent on configuring their impact. Developing frameworks around them and the methods of collecting data was tedious but a rewarding effort.

As lever for the study, Dr Rabea developed some guiding questions to better understand the teaching practices in the current educational landscape and their implications for the learners. Following are the guiding questions she used to tackle the problem at hand:

All the data which she presented was from a project which was a work of common interest among a few organizations in Pakistan and India. In Pakistan, she and her team focused on three districts/cities and surveyed 50 schools and 6 schools were visited for field experience and data gathering. 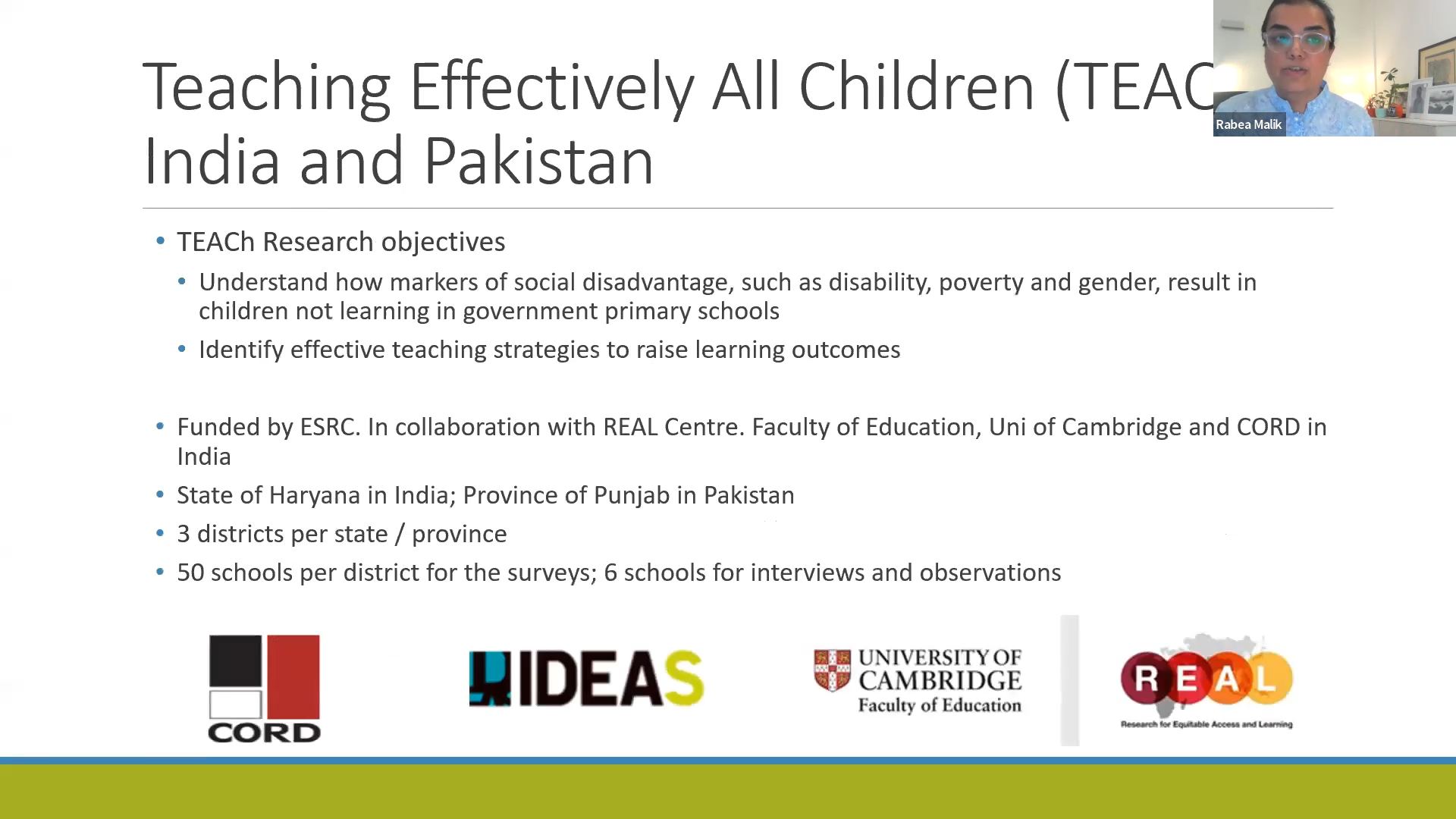 To gather data on teacher practices, they used a narrative-based observation rubric, which was supplemented with questions on practice during interviews. To gather data on students, narrative-based observation rubric was used with a focus on four specific students. Two students among these were at the top of the learning curve and other two were at the bottom of the learning curve in the class. The researchers were able to observe the same child in different class sessions during the study. The study also analyzed data on teachers’ belief and attitudes through observation, interviews and surveys.

Following is the sample of teachers and children/students they used for the study: 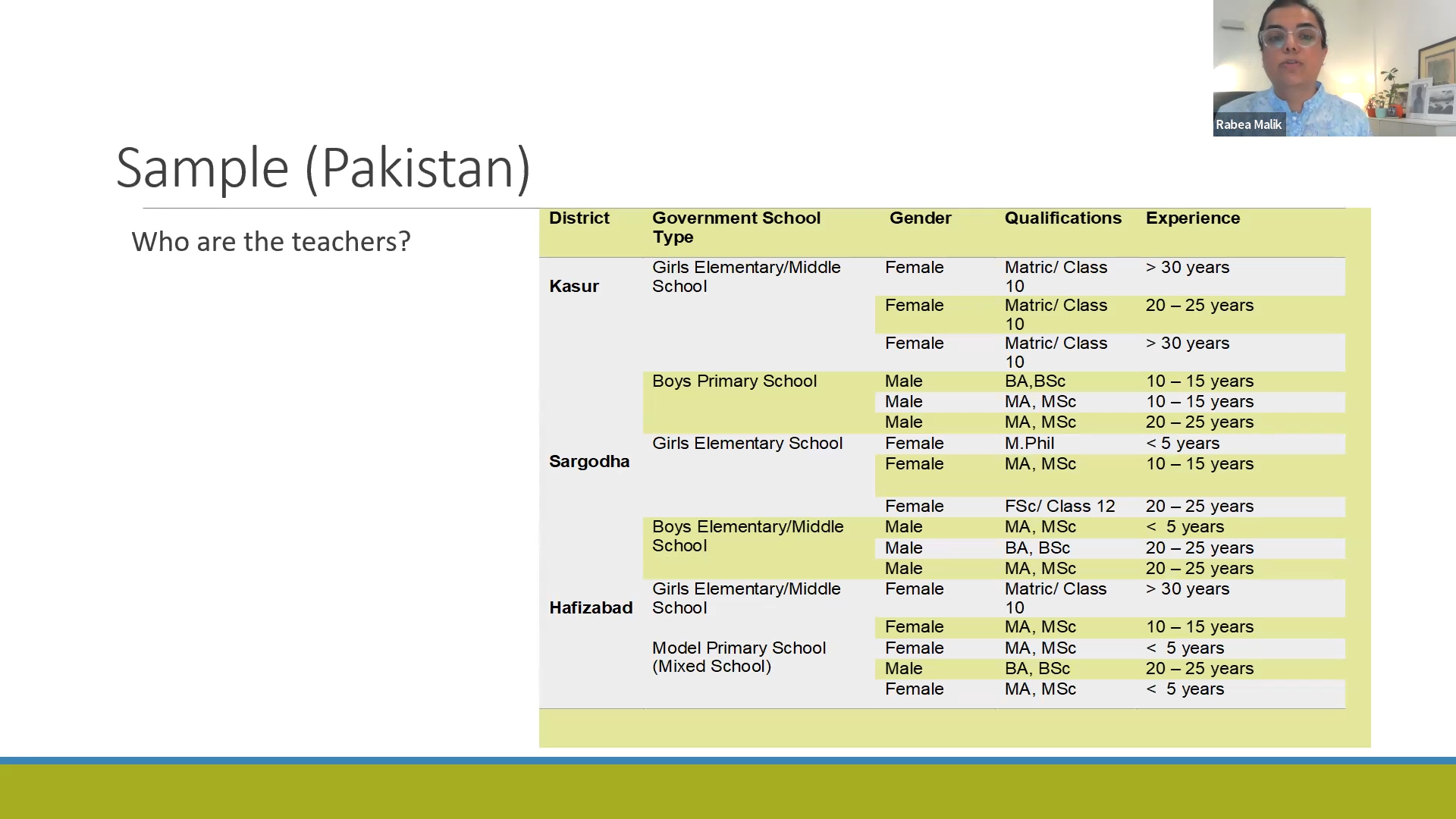 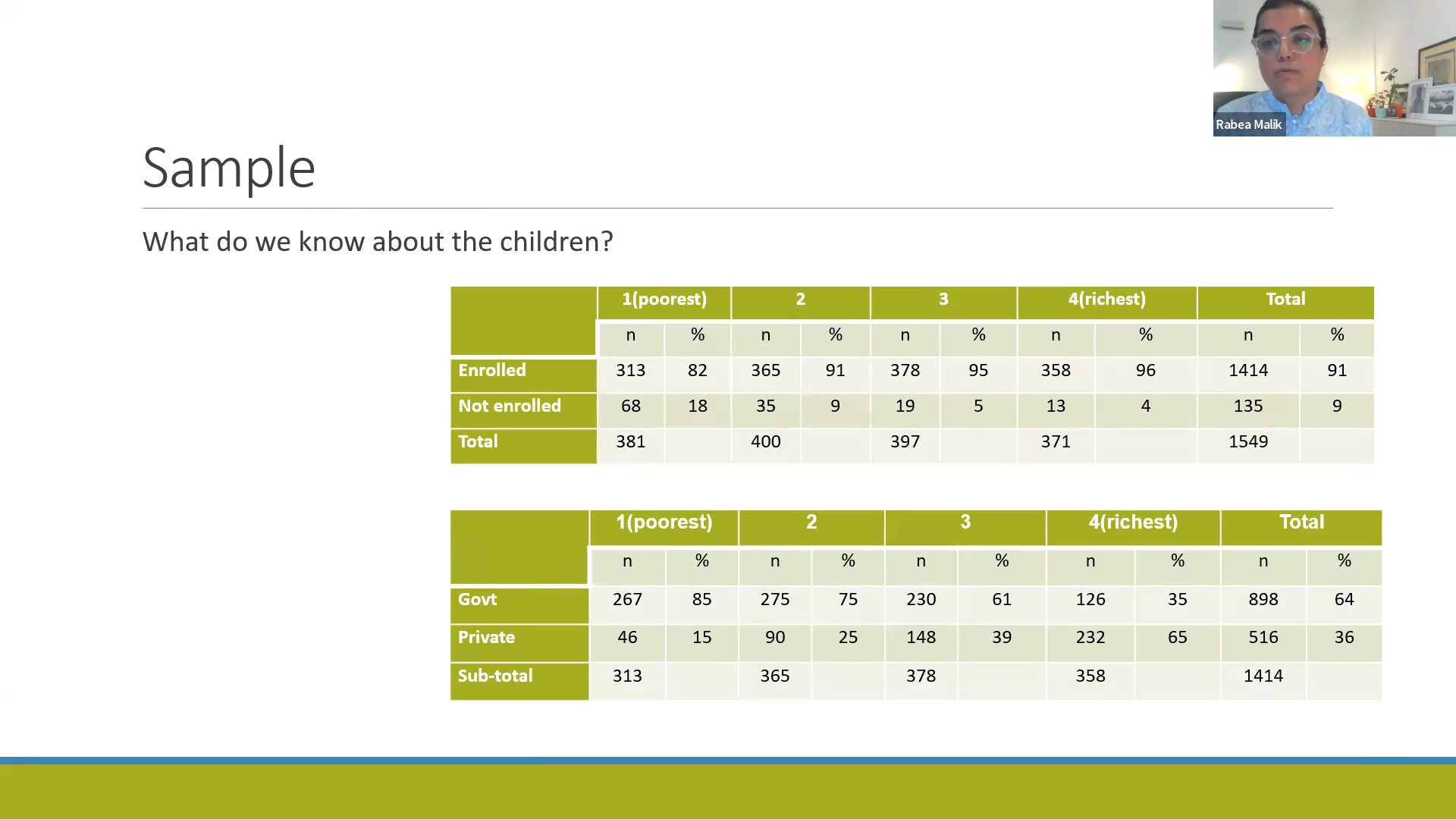 Based on the observation of 64 classroom sessions, Dr Rabea found that predominant method of teaching was teacher-directed instruction, with little interaction with the students. This means, that the students were listening to the teachers while the teachers relayed the subject matter in the classroom, but not any interaction was taking place between the teachers and students. This data was coded over 300 times as a strategy to understand the relationship between teaching and learning.

There were also numerous instances where individualized attention and monitoring was being done. For example, teachers were calling on students to have their workbooks checked during class, and teachers were walking around the classroom to support an individual student during class exercises. These were the prevalent teaching practices in government classrooms observed by the team.

Some group work was also taking place, where the students were seated in small groups and their work was being assessed by the teachers. Sometimes children were directed by the teacher to share learning resources openly or to support each other’s learning. One of the excerpts from her findings are as follows:

“The teacher then gave the task of drawing a diagram representing 2/8. All students started working. It was clear that some students had understood the task, while others were confused and asked their peers and started getting help. During this observation, the teacher told us that students can teach each other better than how they teach students. The teacher approved the helping and the noise that was caused by it and by the end of the 5-minutes, everyone was able to do the given example. It was noted that students did not copy but tried to understand the concept. – Year 4 Boys, CO Kasur”

Teachers were also adapting their pace of learning by using curriculum materials from a lower grade and fewer items were remaining to complete in class. This would be done for students who would be struggling in their classwork. They also expressed an understanding that unless more time is spent on these foundational concepts it would become difficult for some students to progress and accept and operationalize some of the advanced concept. This was a nuanced method of implementing of strategies by the teachers to ensure overall learning of the classrooms.

However, most teachers expressed considerable doubts about the learning abilities of children with disabilities, particularly noting them not to be at par with other children. Teachers valued children with disabilities being school, specifically to support future employment and for socialization purposes. However, they did not see them as benefitting much from academic learning.

Observational data highlighted a disproportionate exclusion of children who were perceived as ‘low performers’ based on simple assessments and corroborated through teacher perspectives. Many interactions observed with this group of children were marked with teacher negativity and frustration. Observational data also highlighted that many of the strategies that teachers used for other children, such as giving individual attention and monitoring work were not commonly observed for this group of children. 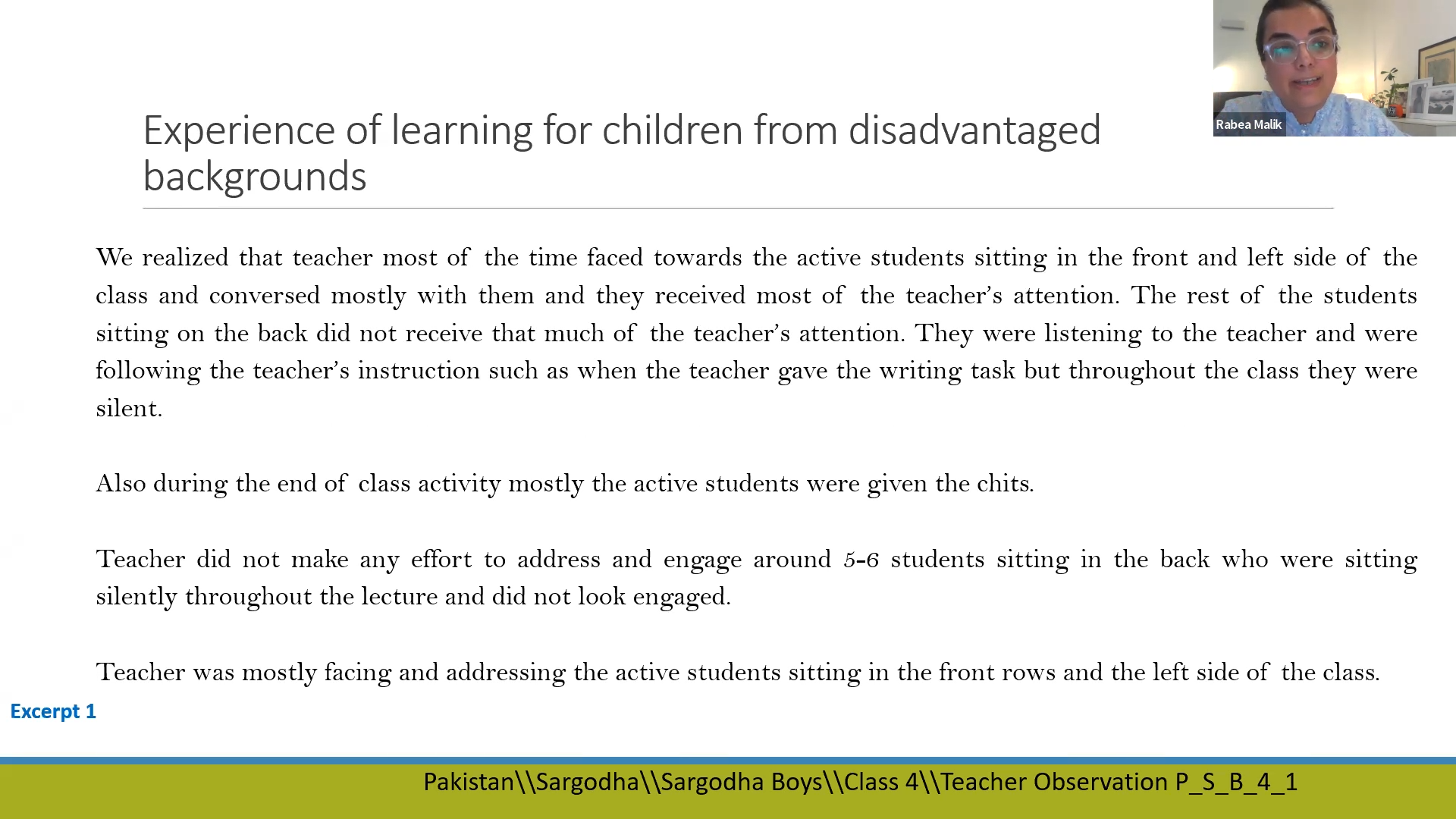 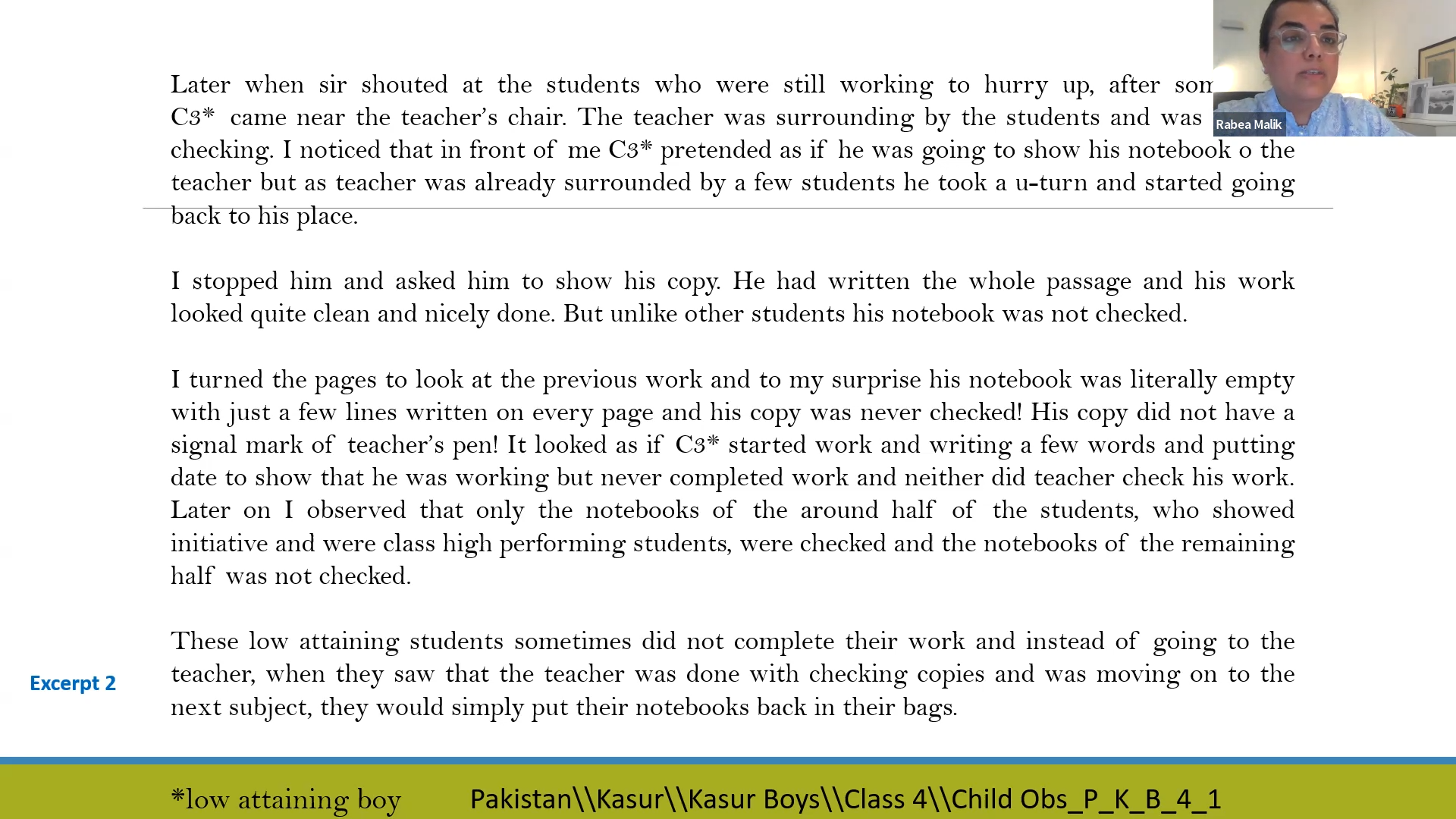 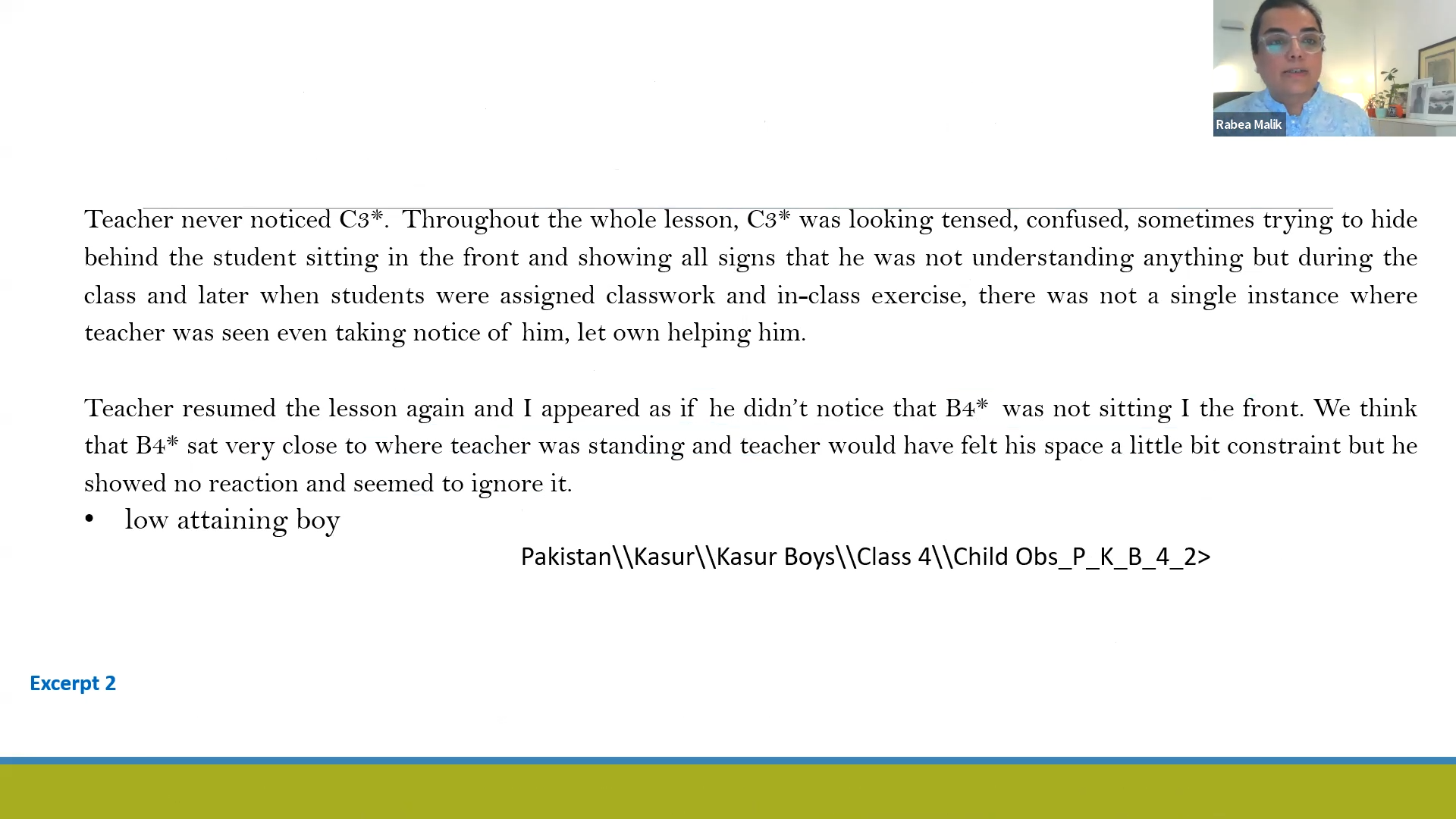 The above slides show observations from two contrasting examples of the classroom interactions.

Through her study, Dr Rabea found that the work this group was performing had a lot of resonance with the large corpus of work found in South Asia. They found that the teaching practices were rooted in the teacher’s belief and attitude toward disadvantage in the classrooms. She combined the work through her own empirical study and through the studies made earlier in the South Asia to contextualize it in a global sense. Two main pathways emerged which helped them build the following model:

i.    Teachers’ expectations from the students regarding how much they can learn
ii.    The level of effort invested in teacher practice and attention paid to students 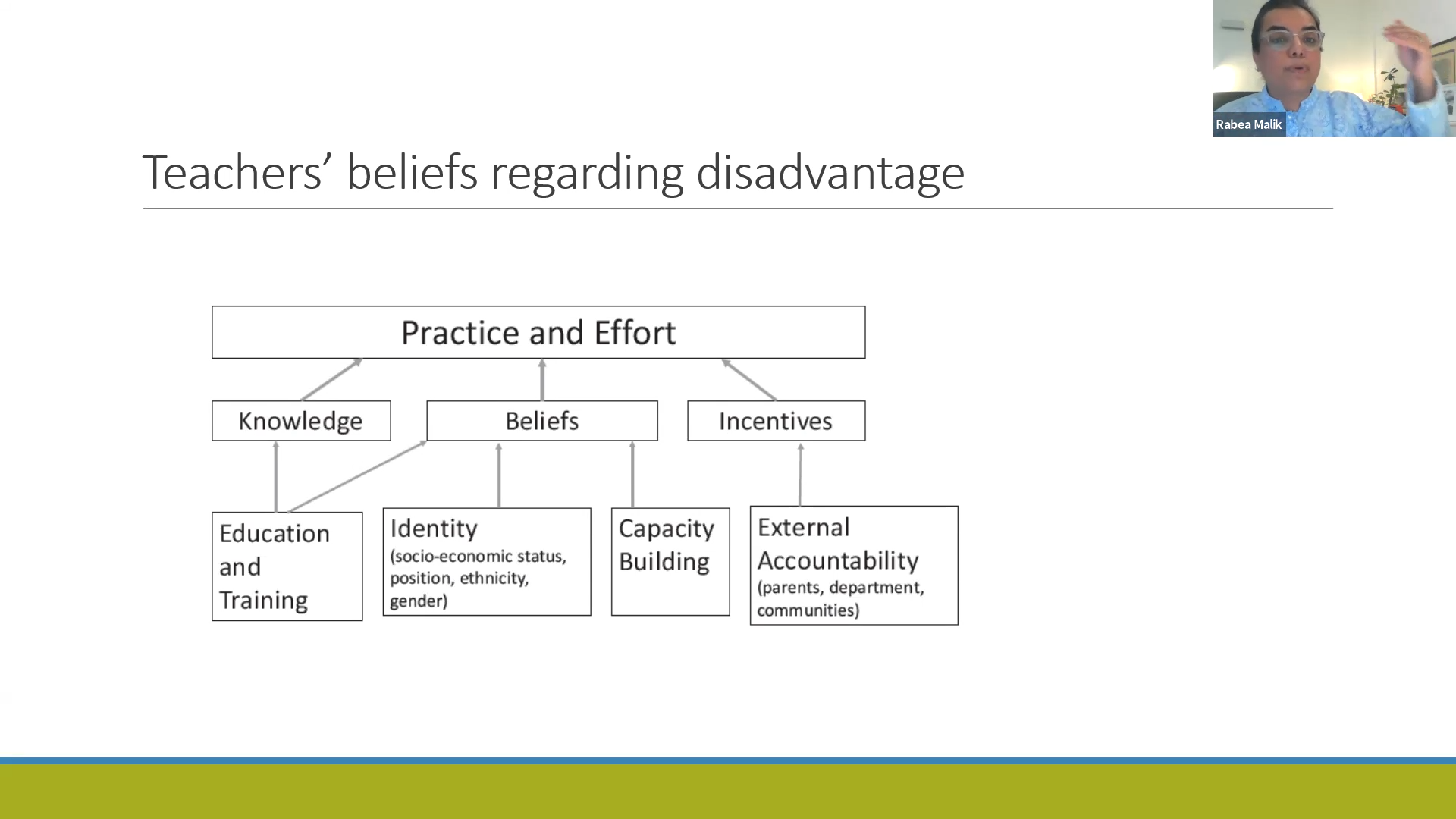 Finally, her study concluded that hypothesis of teachers’ beliefs regarding disadvantage. One answer being that teachers have higher expectations of some students, especially the ones they call ‘good students’. These students are naturally intelligent, have a high IQ, are hardworking and score high grades. These students are also well-behaved, do their homework on time, have their class checked regularly and display a higher level of confidence. According to the teachers, these students also demonstrated leadership qualities and could teach other students and were independent learners. Dr Rabea formulated a theory of the study in the following form. Teachers’ beliefs are linked to students learning and development. And empirical work from the globe corroborates with this understanding. 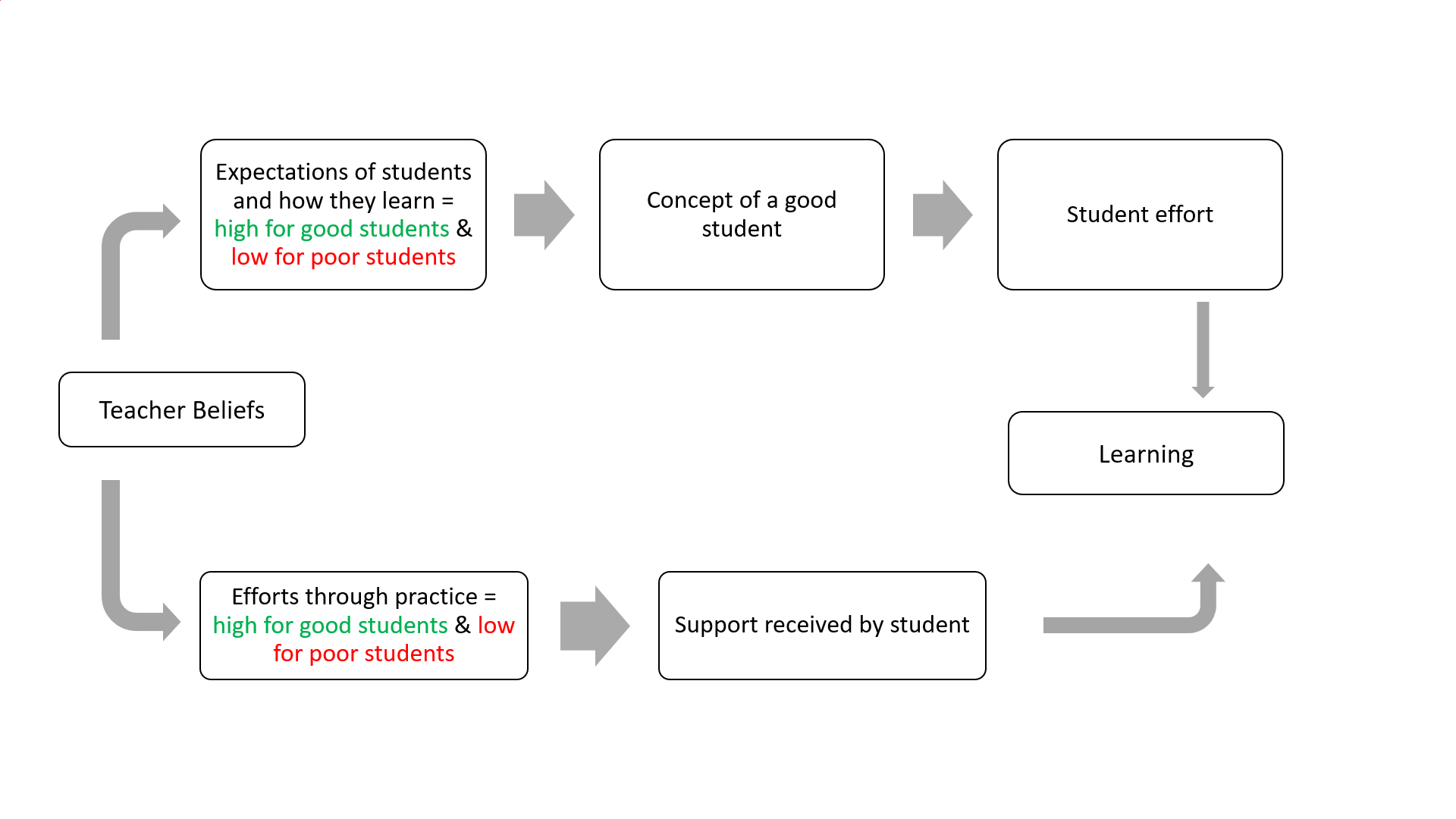 Final takeaways from her research shoed that achieving goals of learning for all require an explicit, sustained and disproportionate focus on improving the learning experience and outcomes for children at the bottom of the learning curve which are the most disadvantaged students. The teaching practice is the most strategic and significant place to resolve inequalities among children with disabilities. Moreover, improving teaching practices requires an engagement with teachers’ beliefs about a range of factors relevant for pedagogy, not least of which are their beliefs about disadvantage.

About Dr. Rabea Malik:
Rabea Malik is CEO and Fellow at the Institute of Development and Economic Alternatives (IDEAS). Her substantive interests lie in the areas of sociology of education and political economy of state sector reform in low-income country contexts. Rabea was Assistant Professor at the School of Education, LUMS between 2018 and 2020, and taught International and Comparative Education and Research Methods to the first two MPhil cohorts. She has a PhD in Education from the University of Cambridge, and more than ten years of experience of policy and academic research in Pakistan’s context. She was the country co-I in Pakistan for Teaching Effectively All Children (TEACh).

About Dr. Tayyaba Tamim:
Dr. Tayyaba Tamim is currently an Associate Professor and the Director of Academics at the Syed Ahsan Ali and Syed Maratib Ali School of Education, Lahore University of Management Sciences. She is the Faculty Lead of the Pedagogical Partnership Programme at the LUMS Learning Institute. She has her PhD from University of Cambridge as a fully funded RECOUP scholar and MPhil RSLE (Research in Second Language Education Across Cultures) from Cambridge, UK as a British Council Chevening scholar. Dr. Tamim has led several funded research projects with national and international partners, including with USAID, British Council, and the World Bank. She has also published and presented research papers at several national and international forums. Her work covers issues of social justice, equity, and inclusivity in education.

About EduTalk:
EduTalk is an exclusive series of guest speaker sessions by the School of Education (SOE) at LUMS, where various topics in educational research field are discussed by seasoned professional from across the globe.